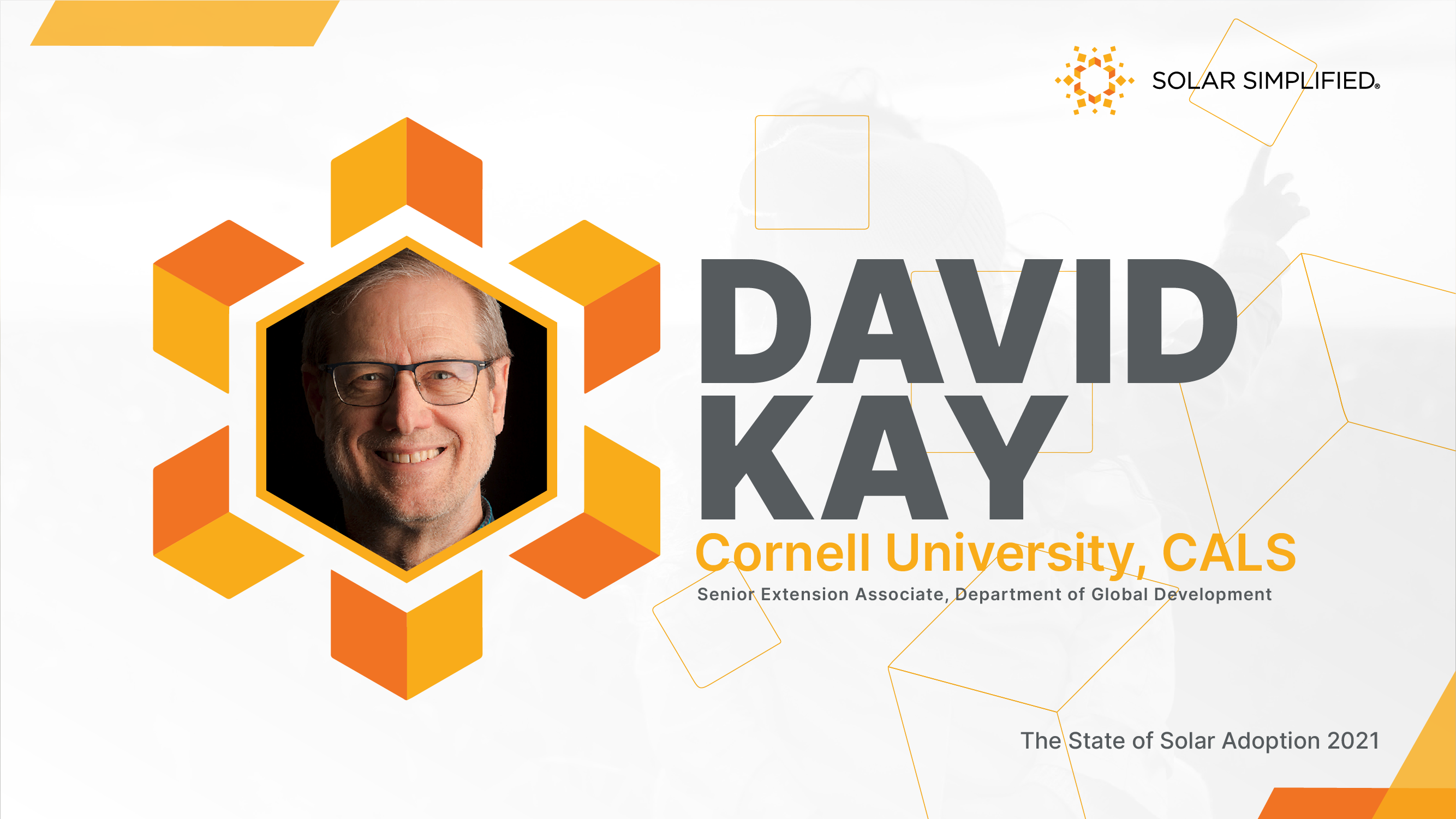 This article is part of our new State of Solar Adoption 2021 Series which will interview a diverse mix of solar experts with the goal of better understanding their perspectives on the current state and future of solar adoption, what is holding the industry back, tips on how to boost adoption, and more.

The following is an interview we had recently with David Kay, Senior Extension Associate, Department of Global Development, Cornell University, CALS.

“Early adopters of solar are for the most part doing quite well in favorable contexts. But our entire economy and way of life have grown up over many decades with an ingrained dependency on fossil fuels. It is practically inevitable, therefore, that there will be many interests vested in the status quo, or at least in “going slow.”

What is the state of solar adoption today?

DK: The adoption of solar globally and in many US states has taken off and is likely to accelerate even more, especially as regards generation of solar electricity. Whereas residential and rooftop solar has been with us in various forms at least since I was an undergraduate in California in the 1970s, it is only in recent years that growth has really boomed. From a small base, the Energy Information Administration recorded a 500-fold worldwide growth of solar electric generation capacity between 2000 and 2018. Just between 2010 and 2018 capacity grew by a factor of 13. In the US over this recent (2010-2018) time period the acceleration in growth greatly outpaced global growth with a 60-fold increase. Surging recent growth is largely explained by dramatic declines in the cost of solar panels to the point that solar is frequently more competitive in the marketplace than are other technologies. This is especially true where the economic fundamentals are combined with policies promoting solar electricity. Such policies are an important part of the effort to mitigate the increasingly apparent and dire impacts of global warming, as has been increasingly well documented by both scientific research and daily news headlines.

At the same time, it is fair to say in the context of climate change that solar is barely past its infancy in terms of where it is likely to end up. Of the approximately 93 quadrillion BTU’s of energy from all sources consumed in the United States, more than ¾ is still derived from fossil fuels. Solar still supplies a very small fraction of our total national energy consumption (just over 1%). Note that the global energy transition that is underway involves at least two major transitions in the forms of energy we use. The first transition is towards the electrification of heating, transportation, and other energy consuming sectors – ie. cars, building heating, and so forth will almost certainly be increasingly powered by electricity. The second and coupled transition is to replace the fossil fuels that have long dominated the electricity generation sector by alternative fuel sources including solar.

DK: First and foremost, I would say we are held back by inertia associated with complexities of the existing system. “Early adopters” of solar are for the most part doing quite well in favorable contexts. But our entire economy and way of life has grown up over many decades with an ingrained dependency on fossil fuels. It is practically inevitable, therefore, that there will be many interests vested in the status quo, or at least in “going slow”. I’m thinking of businesses that have powered the economy by selling fossil fuels, but far beyond that as well. Even those avidly interested in adopting solar need time, resources, information and various kinds of market and non-market-based incentives and partners to actually move from thought to action. Moreover, the changes we need to make collectively require that a huge array of diverse businesses, individuals, governments, and other organizations make decisions that are often interdependent with what others will do.

Second, I would say that while there are certain advantages to state and local diversity and experimentation in policy, the United States has failed so far to adopt coherent and integrated climate and energy policy frameworks that soberly map pathways towards a future in which all people can thrive. In this context, the polarized and increasingly toxic politics that have divided our nation have seriously undermined our ability to solve big problems.

Third, we need to understand a lot better than we do the social, economic, environmental and equity implications of the “socio-technical” change we have just begun. Uncertainty feeds inaction, indecision and inconsistency and it and protracted delay have been the kiss of death for many renewable energy projects. Lack of solid knowledge feeds partisanship, indifference, bad judgment and the proliferation of fear-based misinformation.

Fourth and similarly, I think we lack a broad understanding and more consensus among policy makers and the public of the extent to which solar at different scales, from residential rooftop to community scale to large utility scale, can move us in the directions we need to go. Solar in the abstract is broadly supported by the public, likely because it typically calls to mind through personal experience the residential solar that has been most widely adopted. However, there is much more likely to be ambivalence about or even opposition among those who say they favor solar towards large scale solar facilities that occupy dozens, hundreds or thousands of acres. At the same time, analysis conducted by the National Renewable Energy Lab shows that while the costs of all scales of solar installations have declined precipitously since 2010, residential solar costs have decreased less than have larger installations. Perhaps more importantly, consistent with routine economies of scale, the larger facilities tend to be less than half the cost per watt of capacity compared to residential. Nonetheless, until the case can be convincingly made that solar at multiple scales is necessary to meet society’s needs, opposition is likely to grow.

Fifth, I would point to the labor and supply chain issues that need to be addressed before solar panels and solar electric powered heating, cooling, and lighting devices and appliances can be made widely available in every US community. The priority of figuring out how to implement a “just transition” within a multiplicity of local and regional labor forces that will need new skills and employment is directly related.

DK: Modernize the grid to enable the more seamless integration of distributed generation sources like solar alongside decentralized options like microgrids. Incorporate the social benefits and costs of different fuels more fully into their prices. Legislate aggressive energy transition targets into law. Invest in continuing improvements in solar technology. Create regulatory frameworks and permitting processes that are transparent and clear enough that everyone involved knows what kinds of projects can be approved quickly according to clear and fair standards. Listen carefully to the concerns of solar skeptics and even opponents with open minds and engage them with respect, especially but not only at the local level. Harmonize energy and climate policy across different levels of government. Implement in policy robust and clearly articulated requirements for “climate justice” and “just transitions”. Finally, since so much solar energy is currently being proposed on farmland, invest in developing new knowledge about the true potential for, and the full array of plusses and minuses that may be associated with, the collocation of solar with agriculture.

DK: All of us would be less likely to suffer from the worst impacts of increasingly devastating flooding, prolonged heat waves, massive fires, hurricanes, crop failures, climate induced displacement and migration and many other ills that are already being exacerbated by rapid climate change. The overwhelming majority of us would appreciate being able to maintain a quality of life as good as or better than we experience today. Many people, often the most vulnerable and marginalized in our societies, would experience health improvements due to reductions in the localized pollution associated with the extraction, processing and combustion of fossil fuels - which is not to say that the large-scale production and consumption of solar electricity itself has only negligible negative environmental or potential for localized public health impacts. To minimize these possible negatives and the associated inequitable impacts that have characterized our history of use of other fuels, vigilance and a commitment to justice will be necessary.