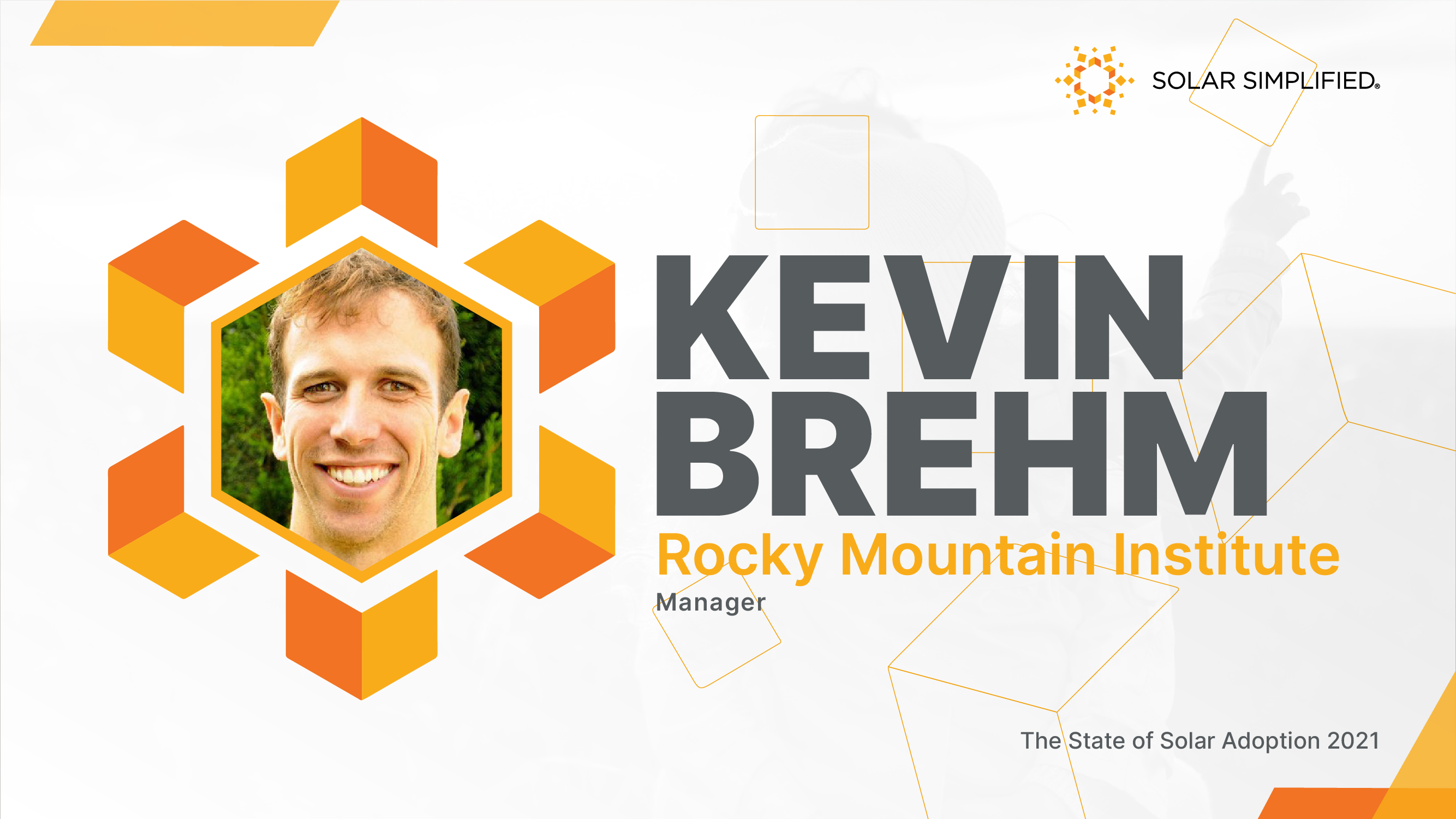 The following is an interview we had recently with Kevin Brehm, Manager, Rocky Mountain Institute.

KB: Solar is making incredible progress–and it still has a long way to go.  Solar continues to grow and set records year after year. In 2020, the US installed more solar than any other power source, setting an annual record of 19,200 MW.. In 2021, the U.S. crossed a milestone when it completed installation of 100,000 MW. – enough solar to power 20 million US homes. This deployment and growth has been driven by economics. Large-scale solar is now the world’s cheapest source of energy.

Despite that progress, solar still provides a relatively small portion of U.S. energy. In 2020 provided just over 2% of U.S. electricity and 1.3% of total U.S. energy needs.

Solar deployment must accelerate if we are going to cost-effectively avoid the worst impacts of climate change. RMI research finds that that the US must install close to 2 million MW solar (2,000 GW) of solar PV by the early 2030s, if we want to keep global warming below 1.5C. Solar is going to be the workhorse of a low-carbon energy system, and it needs to grow not only to help decarbonize power generation, but also to help power electric vehicles, all-electric homes, and low-carbon industry.

That level of sustained growth is daunting, but it is feasible. To reach 2,000 GW by 2032, the solar industry will need to grow by 23% per year over the next decade. The industry has demonstrated this level of growth in the past growing 33% per year in the decade from 2010 to 2020.

KB: The solar market can be broken up into two main segments: large-scale solar (utility-scale solar) and distributed solar (mostly rooftop commercial and residential solar). Each of these segments face unique challenges.

Transmission, siting, and supply chain could pose the biggest headwinds to large-scale solar deployment over the next decade.

Distributed solar faces a different set of headwinds. One of the key challenges for this market segment is cost. According to Lawrence Berkeley National Lab, the total cost to install a rooftop solar array was three times higher in the United States compared to other countries in 2019. Streamlining and standardizing permitting, and inspection protocol could go a long way towards closing that gap and accelerating distributed solar deployment in the United States.

KB: Policy can help drive mainstream adoption. Federal, state, and local policy can enhance solar economics through tax credits or carbon-pricing. Mandates like clean energy standards can also drive adoption. Beyond mandates and economic incentives, targeted policies could help address the transmission, siting, and supply chain challenges mentioned above.  Beyond policy, the industry needs to continue to grow and evolve over the next decade as solar becomes a major part of the U.S. economy and landscape. I don’t know all that is needed to help the industry evolve, but I believe the industry needs to invest in communities, workers, and technology so solar can remain wildly popular, and to avoid the unintended social or environmental consequences that have plagued the fossil fuel industry.

KB: The direct impact of 75% of all Americans using some form of solar energy would be immense. Whether the solar is hosted on rooftops, or community solar arrays, that level of demand would help accelerate solar deployment toward the levels we need to see to avoid the worst impacts of climate change.

KB: Solar really is remarkable. As an energy analyst, I appreciate how cheap and effective solar has become. We’re very fortunate that solar and battery storage costs have declined so rapidly as we enter the critical decade for climate action.

As a humanist, I appreciate that solar is uniquely democratic and egalitarian. The sun falls everywhere on earth – it is not isolated to resource-rich countries or regions. Furthermore, solar energy can be generated at either large-scale, allowing us to pool resources and collaborate, or it can be produced at small-scales, allowing households and communities to maintain energy autonomy and independence.  As a human, I stand in awe of the remarkable invention that is a solar PV panel. Just like nature has been doing for eons, we’ve finally learned to harness the sun to silently and consistently generate clean energy.