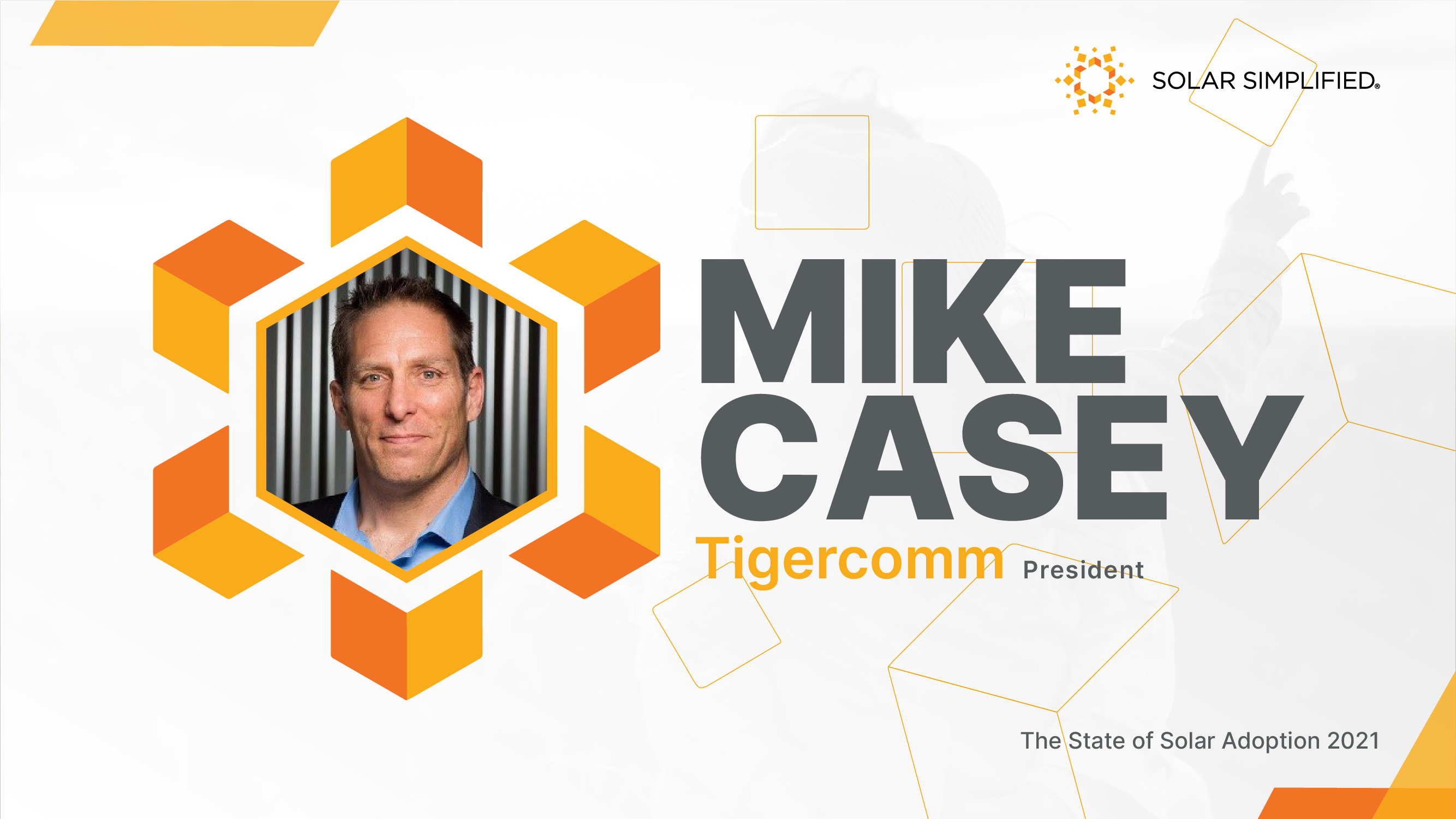 This article is part of our new State of Solar Adoption 2021 Series which will interview a diverse mix of solar experts with the goal of better understanding their perspectives on the current state and future of solar adoption, what is holding the industry back, tips on how to boost adoption, and more.

The following is an interview we had recently with Mike Casey, President of Tigercomm.

“Solar continued gaining momentum during the previous four years of hostile federal policies. To me, it proved that solar has crossed the threshold at which commercial execution is far more important than having pro-solar government policies. Because of that, I see solar’s momentum growing almost inevitably. But imagine what that growth will look like when favorable policies are being advanced at several levels of government.”

What is the state of solar adoption today?

MC: We’re at the bottom of another hockey stick of growth. Solar continued gaining momentum during the previous four years of hostile federal policies. To me, it proved that solar has crossed the threshold at which commercial execution is far more important than having pro-solar government policies. Because of that, I see solar’s momentum growing almost inevitably. But imagine what that growth will look like when favorable policies are being advanced at several levels of government. It’s exciting and rewarding. A team of mules couldn’t pull me away from working in this space.

MC: I see it as a combination of what I’ll call “unforced weaknesses.” The good news is that these are all addressable. The bad news is that no one’s moving forcefully to fix them right now. That lack of agency is the first thing to fix!

I risk going long here because we’ve studied each of these at some length.

First, the sector badly underinvests in its shared public case making… particularly to policymakers. Too many leaders in solar talk about us being a new industry. I argue that we’re a new sector within a power industry that’s dominated by incumbents. Those incumbents have developed strong abilities to fetter disruptive challengers. The cold truth is that we’re going to displace gas if we continue scaling. Gas isn’t stupid. So it has, continues to and will keep on using propaganda and lobbying to the solar sector’s detriment. Just look at the Net Metering 3.0 fight in California.

To respond, each solar business should be treating government affairs as a line item in each business plan. SEIA’s budget should be 10X what it is now. Every large-scale solar project above a certain size should have a visitors’ center to build strong ties to the host community. Those ties can be leveraged in ongoing government relations, particularly with county and state officials. You get the idea.

Second, most solar OEMs have unconsciously accepted commoditization by under-investing in brand differentiation. The resulting margin compression makes for companies that are less profitable than they could be. That, in turn, puts the brakes on the pace of growth and scaling. We need some global solar giants the size of ExxonMobil, and fast. The global climate trends aren’t encouraging us to go slow. We need to move like hell, and big companies will be able to push better against market barriers, even those constructed by the current incumbents.

Third, we are too ready to accept the “intermittency forever” viewpoint from markets and government. A client CEO said to me that storage is “in a beautiful chaos” right now. I agree. But storage will settle out in terms of players and technology, and that will help us get much closer to solar baseload. I think that as a sector, we are too modest in painting the vision of the future that we are on track to bring about.

MC: My friend Yann Brandt and I wrote a New Year’s Day piece in which we talked about how to drop installation soft costs on residential installations. The costs to solar are up a third created by legacy local government practices. Update how installation jobs are permitted and inspected, and you drop costs, boost sector growth and return way more tax revenue and jobs to the local government. And, NREL has the standards that could give any local government confidence that it’s making sound updates to its practices and code.

As an industry, we can successfully advocate for this. Doing so will require us to build greater public affairs capacity and best practices that we’ll need for the next 10 issues. So, not only is the policy idea a “no brainer,” but solar’s pursuit of that policy is also a “no-brainer.”

MC: I’m no futurist, but I think we’d have a more secure grid and greater resilience. We’d have more families with greater energy independence and more money in their bank accounts. More utility executive teams would be comprised of those who stopped fighting inevitable progress and had been thoughtful about moving their organizations toward being more like nimble businesses. We’d have taken an enormous chunk out of air pollution, with fewer health problems that come from that. And, we wouldn’t be paying for fossil fuel welfare programs. That’s a lot of savings.

MC: I spent the first twenty years of my career working in politics and then the environmental movement. Along the way, it became clear to me that only an industry could beat another industry. Even effective NGOs can only win piecemeal victories, Swiss Cheesing-away at a problem. But a fast-growth industry with real financial muscle can wipe away an archaic, problematic industry or practice much more quickly.

The amazing thing for me in working in solar is that I get to support a bunch of companies in meeting their business goals. Their successes accumulate into real planetary hope. Besides, there are a lot of fun, smart and dedicated people across the sector. It’s a privilege to make my living working among them.