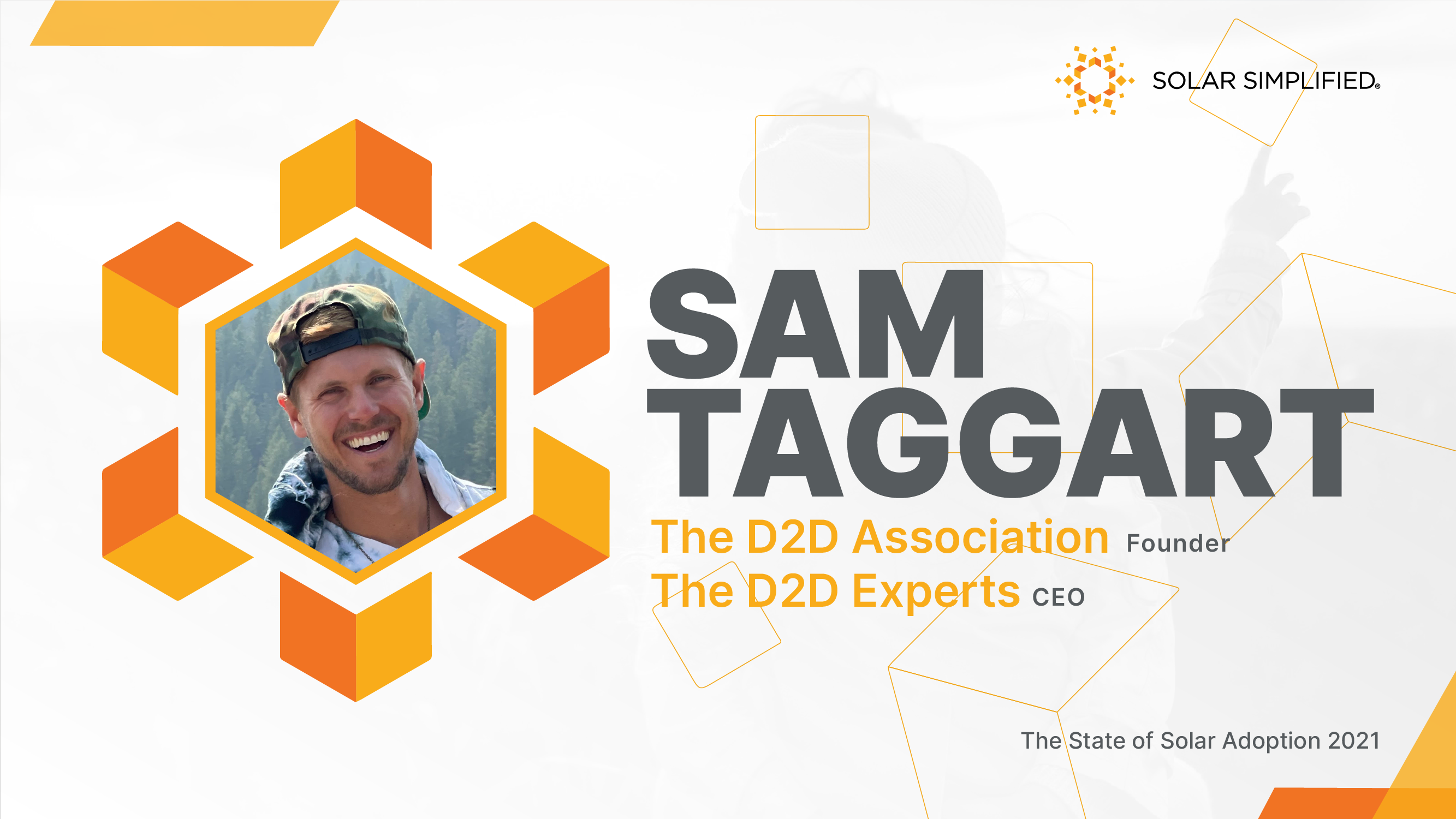 The following is an interview we had recently with Sam Taggart, Founder of The D2D Association., D2DCon, Speaker, Author of ABC$ of Closing, Podcaster, and CEO of The D2D Experts.

ST: I believe Solar adoption is just getting started. I’m extremely excited to see how other states start to open up like Arkansas, Kentucky, Alabama. Places like this have yet to even see Solar introduced on a mass scale.

ST: The major things that are holding the solar industry back is simply trust in the products. Most people don’t believe the sun is going to power their home. And that it will last long enough to be worth her while to purchase. Because it’s new to the market they only have the evidence of new people getting solar to go off versus studies done in states like California that have a much deeper history of solar.
Another reason it is not getting mass adoption is due to not enough savings shown on their power bill to make it worth it to go through the hassle of the construction project. When pricing comes down and electric bills go up it will only create more and more of a value proposition to go solar. Also, the more people that get electric cars and that becoming mainstream creating higher electric bills will also drive the demand for solar and the proof of concept to become more accepted.

ST: Just like anything that trends on social media. The more people can drive the mission of purifying our electricity and creating cleaner resources and creating a new shift in mindset will create bigger demands for Solar. As the baby boomers oil Advocator‘s Day off and Gen Z grow up as homeowners this will create higher demand for solar simply because they understand the innovation of technology.  Another driver to create solar adoption is simply state and utility initiatives. In states where there are incentives and propaganda around those incentives it creates higher demand and trust for people to buy into the concept of renewable energy. When electricity companies combat solar initiatives this is what creates market confusion.

ST: I believe Solar is more spiritual and godsend than we make it out to be. I believe Addison‘s form of creating power grids actually was a polluting and bigger impact down to an atomic and energetic level that affects the frequency in which we as humans operate. The consciousness and function of human energy will be uplifted as we purify the form in which we consume energy and interact with it, and how it powers our lights, our cars, our homes, etc.

ST: Solar isn’t just a way to make great money, it truly is a revolution in the energy sector. I believe it is a disruptive and must-have source of energy for our planet to take on new evolutions and progression towards self-sustaining, higher frequency and purification.
If we don’t promote cleaning water, energy, air, food, we will slow down and mask the true potential that the human body and spirit are able to accomplish. We have operated under monopolistic chemically induced forms of consumption. Limiting the human potential and ability to connect truly with source.