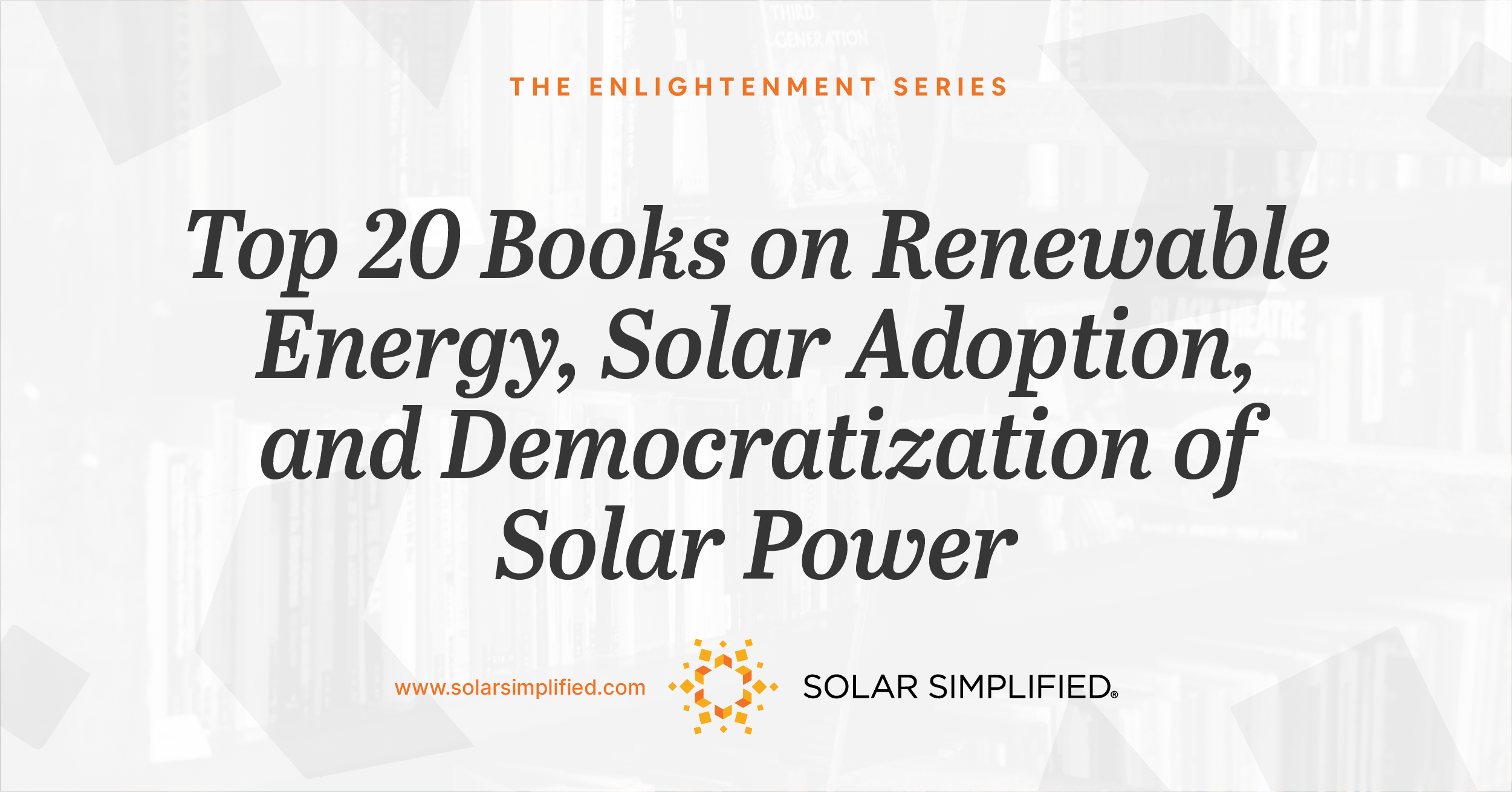 
Few forces have as much universal consequence as energy. Access to energy is the number one determinant of whether someone will be impoverished, and whether they will remain impoverished.

And yet, with increasing cognizance of dirty energy’s impact on the environment, energy access is no longer the sole concern. Access to clean, sustainable energy is, for many, just as important.

Without knowledge of the state of renewables and fossil fuels, the costs and benefits of further renewable adoption, and the efficacy of clean energy sources, how can we chart an intelligent path towards a sustainable future?

Which is why we’ve dug up some of the most enlightening books about renewable energy, and solar energy in particular, for your reading pleasure.

From Space to Earth: The Story of Solar Electricity

John Perlin’s From Space to Earth: the Story of Solar Electricity traces the history of an energy source we are harnessing in an increasingly effective manner: solar electricity.

Released in 1999, the book remains extremely relevant today. The historical account displays how far photovoltaics (the fancy word for converting solar light into energy) has come since its earliest iterations.

You might be surprised to find how integral solar energy has been in propelling some of our most critical industries. Taking a global view, Perlin examines how solar has helped nations across the world develop. Individual case studies may be eye-opening for those skeptical of solar potential as a viable, reliable energy source.

Those who want tangible stories of solar success will find plenty within the pages of From Space to Earth.

Sustainable Energy — Without the Hot Air

Skeptics will appreciate the tone of realism that MacKay strikes. He’s not a fantasist, but instead an objective evaluator who addresses:

If you want to learn about the potential of renewable energy without the hot air, this is the book for you.


Who Owns the Sun? People, Politics, and the Struggle for a Solar Economy

Daniel Berman and John T. O’Connor co-wrote Who Owns the Sun? People, Politics, and the Struggle for a Solar Economy, a full-fledged argument that democratized solar is the future of energy in America. Or, at least, that it should be.

Individual participation in solar energy, the book argues, is the key to “putting powers” (literally) “back into the hands of local people”. Think of this as a citizen’s guide to energy independence through solar power.

Solar Trillions takes an investor’s look at the growing solar energy sector. Author Tony Seba likens solar energy’s current state to that of cell phones, the internet, and personal computers. That is, solar energy is in the nascent stage of a massive growth boom.

Seba examines opportunities like desert power, maximizing residential solar, and what he calls the “eBay of the smart grid”.

As the Executive Director of the U.S. Department of Energy’s Loan Program Office, Jigar Shah has a firsthand view of the energy sector’s evolution. In Creating Climate Wealth, he examines how market-driven solutions may be the best means of combating climate change.

Shah posits that impact investment by global corporations could generate a sizable return while improving the state of the environment.

The Solar Economy: Renewable Energy for a Sustainable Global Future

Hermann Scheer’s The Solar Economy: Renewable Energy for a Sustainable Global Future operates on the premise that fossil fuels are going to run out eventually. Along with this fixed supply, fossil fuels have fueled much global conflict, and could be the root of worsening conflict should we fail to find a viable alternative energy source.

Scheer proposes that solar power could lead a renewable upsurge tantamount to a “new industrial revolution”.

Earth: The Sequel — The Race to Reinvent Energy and Stop Global Warming

Though “global warming” has since been adopted under the climate change umbrella, Miriam Horn’s 2009 novel Earth: The Sequel remains relevant. The book focuses on “the bold innovators and investors who are reinventing energy and the ways we use it”.

It is interesting to compare the state of renewable energy and energy innovation in 2009 with its progress today. Far from an anachronism, Horn’s book contains several lessons and truths that apply to the energy landscape of 2021 just as they did in 2009.

Published by the National Renewable Energy Laboratory (NREL), the Guide to Community Solar: Utility, Private, and Non-profit Project Development is precisely what its name suggests that it is.

Published in 2012, this is a step-by-step guide for those who want to start community solar projects. The target audience for the book includes “utility managers”, “solar energy advocates”, and “government officials”. But really, it’s for anyone with the will and wherewithal to start a community-based solar energy project.

The New Map: Energy, Climate, and the Clash of Nations

Daniel Yergin is a global energy expert who has won a Pulitzer Prize for his work in this field. His book The New Map: Energy, Climate, and the Clash of Nations is a member of USA Today’s Best Books of 2020 list.

The book examines how America’s discovery of vast energy resources under our shale is seemingly at odds with our search for carbon-limited energy resources (like solar). It examines this dichotomy within the lens of the coronavirus pandemic, existing global politics, and a significant economic downturn.

There Is No Planet B: A Handbook for the Make-or-Break Years – Updated Edition

The updated version of Mike Berners-Lee’s There Is No Planet B elaborates on the premise of the original, which was published in 2019, through the lens of 2021. The book presents a “big-picture perspective on the environmental and economic challenges of our day”, as well as recommendations for individuals to address those challenges.

Solar Power for Beginners: How to Design and Install the Best Solar Power System for Your Home

Useful advice is invaluable when it comes to solar power. Books like Solar Power for Beginners help dispel the myths about solar power—excessive expense, difficulty, limited upside—while providing a roadmap for solar participation.

Authors Paul Holmes and Shalve Mohile promise readers that “even if you don't know anything about electricity, you will be able to set up your custom solar system without a headache” after reading their book.

The Third Industrial Revolution: How Lateral Power Is Transforming Energy, the Economy, and the World

His proposed solution: renewable and internet technology, which he argues are the basis for a Third Industrial Revolution. The goal? “Hundreds of millions of people producing their own green energy in their homes, offices, and factories, and sharing it with each other in an "energy internet”. Read this book to learn how this Revolution may unfold.

The Boy Who Harnessed the Wind

A “remarkable true story about human inventiveness”, The Boy Who Harnessed the Wind was also made into a film published by Netflix in 2019.

The story focuses on a boy named William Kamkwamba, born in the African nation of Malawi. After reading about windmills, Kamkwamba sets out to design and install a windmill to bring electricity and running water to his fellow villagers.

The story is not only awe-inspiring but is a reminder of renewable energy’s remarkable power at the individual level.

The Grid: The Fraying Wires Between Americans and Our Energy Future

Gretchen Bakke’s The Grid shines a light on America’s national power grid. The topic is something that most Americans do not consider on a regular basis. That is, until weather events (see: Texas) or other catastrophes force them to consider the nature of our national power supply.


This book rolls American history, education about renewable energy, and a practical proposal for our future into one.

Can you speak authoritatively about energy without knowing its backstory? Perhaps, but why not do your homework?

Richard Rhodes’ Energy: A Human History presents the history of energy in an accessible way. Energy has played a singular role in the progression of humankind, but how has it changed over the course of time?

Rhodes examines this history, and considers the nature of the energy crossroads which we currently find ourselves at.

The Upcycle: Beyond Sustainability--Designing for Abundance

This book follows up their original work, Cradle to Cradle, by applying real-world lessons the authors have gathered from a decade-plus of sustainable living. It is a complete reimagination of the world around us through the lens of sustainability.

The New Climate War: The Fight to Take Back Our Planet

Michael E. Mann’s The New Climate War focuses on the big-picture of combating climate change. Rather than emphasizing individual behavioral modification, it focuses on the behind-the-scenes war that fossil fuel companies have waged to make renewable energy appear odious to the individual.

Though this may be one of the more polarizing books on the list, it ultimately presents a plan for further implementation of sustainable resources in our energy landscape.

Insane Mode: How Elon Musk’s Tesla Sparked an Electric Revolution to End the Age of Oil

Fans of Tesla and Elon Musk may particularly enjoy this one. However, it is a worthwhile read for anyone with interest in the future of renewable energy.

Dubbing Tesla “the most revolutionary car company since Ford”, author Hamish McKenzie frames the rise of Tesla as a David vs. Goliath story, with Goliath being “Big Oil”.

McKenzie has skin in the game as a former writer for Tesla, but this also allows unique insight into Tesla’s rise and what it could mean for the future of practical, sustainable solutions that fit within our daily lives. (Link)

A Question of Power: Electricity and the Wealth of Nations

Author Robert Bryce illuminates a quandary: energy demand continues to rise, but supplying energy continues to be a significant challenge. Lack of infrastructure, the cost of upkeep, and unpredictable hazards all lie in the way of worldwide energy access.

Superpower, a novel from author Russell Gold, documents the life story of Michael Skelly. Skelly has been working in the renewable sector of wind energy since 2000 and has been on the front lines of renewables over the past two decades.

Conclusion
These books are an Amazon purchase, Audible credit, or Barnes & Noble trip away. Level up your solar knowledge with one or more of these written or spoken resources.